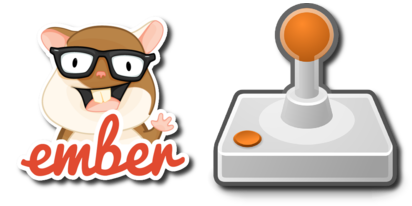 EmberJs controllers conform to the pure MVC definition of them.

EmberJs enforces a clean separation between properties and actions within a controller - all actions are grouped into a single hash.

Another things worth pointing out here, is that unlike AngularJs, EmberJs distinguishes between properties set on the controller, and models used by the controller. Models are typically created and passed into a controller, by a Ember.Route object, which we shall take a look at when we look at routing. This is because there is only one instance of any controller instantiated, and thus its state does not get reset each time. This is can be confusing when working with EmberJs for the first time.

Another thing worth noting is that we had to name this controller FooController. In AngularJs, we were free to name our controller anything we wished to - BarCtrl would have worked just as well as FooCtrl. In EmberJs, however, we must take care to name our controllers - and most other types of objects - according to the specified naming convention.

This is a common beginner's gotcha, and takes some getting used to. Until then, do not hesitate to refer to the handy tables, in the naming conventions guide as a reference. A completely customised naming strategy is also possible, by extending (or replacing) EmberJs' default resolver. However, this is often more effort than it is worth, and most developers will choose to stick to the default resolver.